Brought to you by: Paul Gorski - September 15, 2017
GET READY FOR AN ENTERTAINMENT FEAST 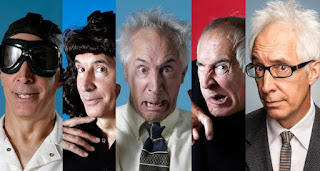 DATE: September 15, 2017
FOR IMMEDIATE RELEASE
CONTACT:
Richard Daniels - info@monroeartscenter.com
Lori Grinnell - info@monroeartscenter.com
Phone: 608-325-5700 or 888-596-1249  www.monroeartscenter.com
GET READY FOR AN ENTERTAINMENT FEAST
MONROE, WI – Matt Lauer of the Today show said, "I like him because he's insane, completely insane."  The New York Times has written, "He merits a place on anybody's all-star team of the goofily gifted."  They are speaking of the one-and-only, Robert Post.
Robert Post's one-man variety show, "Post Comedy Theatre," serves up a delightful entertainment feast of hilarious proportions.  It's an act unlike anything you've ever experienced.  Post will bring his lightning-fast pace, meticulously crafted sketches filled with bumblers, dreamers, and cartoonish heroes of every kind, flawless timing, and sidesplitting improvisation to the Monroe Arts Center stage on Saturday, September 23 at 7:30 pm.
Once Robert Post takes the stage, you can't take your eyes off him.  You find yourself roaring with laughter and shaking your head in amazement.  He serves as his own witty master of ceremonies, improvising as he banters with people in the crowd.  One moment he's a bungling burglar and the next, a physics-defying stunt pilot.  He sends plates and bowls magically spinning as master chef Pasquale, whose booming voice and acrobatic feats send up a mesmerizing spoof of the TV cooking show.  And when he ducks offstage, video clips take you on the road with him as he travels the world, visiting off-beat attractions and doing quirky interviews with the people he meets.
Robert Post discovered the joys of the stage at Ohio State University, where he studied theater and dance before hitting the road with a touring mime and improv troupe.  The experience of traveling up and down the East Coast in an old milk truck that served as a tour bus, performing everywhere and anywhere, and passing the hat for payment, not only stretched Post's talents but also developed his knack for playful give-and-take with audiences.  He crafted his signature style during intensive workshops with the legendary performer and teacher, Tony Montanaro, who ran Maine's Celebration Barn Theater-Maine's Center for Immersive Physical Theater Training located in South Paris, Maine.  Post credits Montanaro for "flipping the switch," helping him see how he could combine his love of character work, movement arts, and improvisation.
And so the antics spun on, in a career spanning more than forty years.  The sketches that make up Post's one-man variety show – "Post Comedy Theatre" – have captivated audiences across the United States as well as in Canada, Mexico, Japan, Turkey, and Europe.  He has appeared on the Today show, and he was invited to perform for children in Beslan, Russia, at the school that had been devastated by a terrorist attack in 2004.  A PBS special on his work, "Robert Post – in Performance," won an Emmy.  His wide-ranging travels have led to "Post from the Road," a delightfully quirky video series featuring his encounters with – and bemused observations on – the weird and wonderful byways of American culture.
Elegantly elastic and multi-talented, Post has created a show of sheer delight.  See for yourself what everyone is talking about.  Take your seat and settle back but just don't expect to keep a straight face.
Reserved seat tickets are $25, $20 for adults, and $10 for students 18 and under.  Tickets may be purchased at the box office located at 1315 11th Street, by calling 608-325-5700, or online at monroeartscenter.com.
PHOTO CAPTION:
Robert Post's one-man variety show "Post Comedy Theatre" will serve up a sumptuous entertainment feast of sidesplitting proportions at Monroe Arts Center on Saturday, September 23 at 7:30 pm.  His lightning-fast pace, meticulously crafted sketches, flawless timing, and hilarious improvisation leave audiences roaring with laughter and shaking their heads in amazement.  Reserved seat tickets are $25, $20 for adults, and $10 for students (18 & under).  For tickets and information contact the Monroe Arts Center at 608-325-5700 or online at www.monroeartscenter.com.
PHOTO/S:
Robert Post as Master Chef Pasquale
Robert Post-Multiple Characters
__________________________
Monroe Arts Center
P.O. Box 472
1315 11th Street
Monroe, WI 53566
608-325-5700
888-596-1249
info@monroeartscenter.com
www.monroeartscenter.com